Warning: Use of undefined constant DATABASE_SERVER - assumed 'DATABASE_SERVER' (this will throw an Error in a future version of PHP) in /home/b8bu76dzlzwa/public_html/wp-config.php on line 28
 I Help Great Ideas Get Found | Emma Still

My brother was in town visiting a few friends this past week in Philadelphia. I decided to meet up with all of them for some drinks after work, since my brother and I rarely have the opportunity to hang out. He lives in Queens with his girlfriend, works crazy hours in a nursing home kitchen and does street art in his free time. That makes getting together for holidays, or even the occasional lunch somewhat difficult.

My brother and I have never been super close, but he has always been supportive of me, impressed with my accomplishments at such a young age, and takes every chance he can to brag about me to his friends, coworkers, acquaintances– you name it.

My brother never went to college. He got himself into some trouble in his teenage years, and at 27, is still working on bettering himself. He has a job that he enjoys, but maybe doesn’t earn as much money as he’d like, and has somewhat of a “starving artist” mentality. For this reason, I think that he admires how hard I work and the things I’m working to accomplish in my career. I wouldn’t ever call it jealousy; I genuinely believe he is proud of his little sister.

Over $1.00 tacos at happy hour, he was having a side conversation with one of his friends, who I would say shared similar qualities as my brother in terms of hobbies, career goals, and personal traits. My brother was telling him about what I do for a living, cool perks of my job, etc. He called across the table and said, “Em, tell him what it is that you do!” Not a  lot of people, including myself, can really describe what SEO is. So I explained that I do “marketing”.

“Well, I do marketing on the Internet.”

“Well, I market my clients on the Internet, yes.”, I replied.

“Yeah, but what does your company do?”.

I explained that a business will come to SEER with goals of ranking higher in Google, more or less. And he replied “How many people work at your company?”.

He replied back that he couldn’t believe that we could employ 60-70 people at a company that is basically a scam.

“You can just Google how to rank higher in search results; how can people even pay you to do that?”.

I was trying hard not to be insulted. Across a loud, crowded bar, I didn’t have the energy to effectively explain that it’s not that simple, and that it requires skill and marketing knowledge, on top of countless other skills and areas of expertise, so, exhausted, I just said “It’s more complicated than that.” and left it at that.

My brother, although agreeing with his friend, still chimed in and tried to make me sound legitimate by bragging about some of the benefits we have at SEER, but there was no convincing this guy. Every benefit he rattled off was returned with a “Yeah, well,  my brother’s cousin’s sister has blah blah blah” or a “Yeah, well, at my last job we could do blah blah blah”. I was confused. Why did this guy I literally just met feel the need to act so defensive? Why was he attacking his friend’s little sister’s job?

I’m sure there were plenty of reasons, but maybe a few too many happy hour Tecates had something to do with it.

This wasn’t the first time that someone thought that my job was pretty much pointless. I was dating a guy who was in medical school (an accomplishment that is ubiquitously well-respected), and we were laying in bed doing work together one night. He was studying for one of what seemed like a million exams that semester, and I was doing my nightly SEO-reading. I was talking about something I was doing at work that day when he interrupted and asked me “if I was comfortable with the fact that my industry was going to be obsolete soon.”

“It’s something that, in a relatively short period of time, computers will be able to do for you.”

Realizing that I was grossly misunderstood, I tried my hardest to explain that it’s not a plug-and-play, one-and-done type of simple solution that could be easily automated by a computer. I was defeated and discouraged. I didn’t do a very good job convincing him that people who work on the Internet have incredible job security, just like doctors.

(Oh, and here’s breakdown of jobs that run the risk of being replaced by a computer, just FYI. I don’t see SEO on there.) *sassy Z snap* 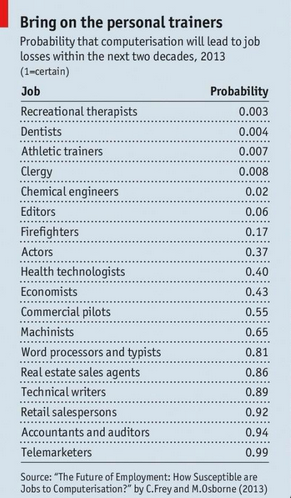 I’ve found that people who don’t know about SEO tend to simplify it down to it’s most basic parts. It’s just about figuring out Google’s formula, and then making a website show up – EASY! If it were that easy, everyone would do it. There would be no such thing as a job in SEO.

People who do SEO, or at least know a little bit about it, know it’s not even close to being that simple. There’s so many factors that contribute to being successful in search, and it’s impossible to explain in a brief conversation, without seeming like you’re reaching or desperate. Some people just won’t understand.

Part of SEER’s belief  is “helping great ideas get found”. Maybe that’s what I should tell people when they ask what I do for a living.

3 Responses to I Help Great Ideas Get Found