Warning: Use of undefined constant DATABASE_SERVER - assumed 'DATABASE_SERVER' (this will throw an Error in a future version of PHP) in /home/b8bu76dzlzwa/public_html/wp-config.php on line 28
 This is Emma Still's Awesome Website.

As a digital marketer, count how many times you have thought to yourself, “Jeez… it’s so tough to find good people to hire in this industry.”

You’re not alone. When you’ve got competing priorities sometimes finding the right people to join your team falls pretty low on your to-do list. Whether that’s because it’s too hard, you don’t have the budget to hire recruiting help, or you just don’t know where to start – we’ve all been there.

The problem is that Digital Marketing is such a high-growth, fast-paced industry that if you aren’t getting the right people on your bus, you’re losing competitive advantage. Fortunately, there are ways to utilize your digital marketing prowess to easily find qualified people that you could add to your team.

Think of it this way:

Recruiting is exactly the same as smart link building.

When forming a smart link building strategy, you first search for people in your brand’s niche that would want to link to your site. Then, you reach out to them with a value proposition or request. Hopefully they respond and express interest in building a relationship with your brand.

This is exactly the same process (good) recruiters use. Great recruiters first seek to start a conversation or spark an interest with a candidate in the hopes that they are interested in joining their company’s team. It’s the same process as link building, but the language in the HR world just differs slightly.

Coming to you live from Mexico! This is the second solo resort vacation I’ve taken (my first was in Puerto Rico last year) and would like to share some things I’ve learned while traveling “solita”. Some of these lessons are specific to warm weather, resort, and foreign countries, but if you’re considering a vaca that doesn’t fit neatly into that box, just use your imagination.

1) If you’re going to a country in which you don’t speak the language, you should learn how to say “Nope, just me” in their native tongue. And prepare to repeat it at leeeasstt 11 times a day.

2) Have an answer prepared for “what are you doing tonight?” that makes attempting to interpret The Real Housewives in English and ordering room service for yourself sound non-negotiable for when the creep at the pool named Damian from Miami, with two kids old enough to have kids themselves, asks to eat a sub-par “steak dinner” together at the (free) hotel buffet.

END_OF_DOCUMENT_TOKEN_TO_BE_REPLACED

Can you remember a manager that you looked up to or admired? What was it about them that earned your respect? Part of what makes a good manager is having a solid skill set, sound judgment, and good decision making skills, but have you ever looked up to a manager just for the person that they were? Part of being a good manager is simply being good to those around you.

As a manager, there are many duties that fall into the large, seemingly ambiguous category of “being good to people” like doing great work, getting results, mentorship, coaching, providing opportunities for continued learning – the list goes on.

When I began managing my own team, I thought about what it really means to “be good” to your team, and the tangible steps I could take to fulfill that requirement.

If you’re managing people in any capacity, whether that be clients, team members, or other managers, the following are some of the little things that can help you establish a layer of trust with the people you work with to make them feel heard, appreciated, and cared for.

END_OF_DOCUMENT_TOKEN_TO_BE_REPLACED 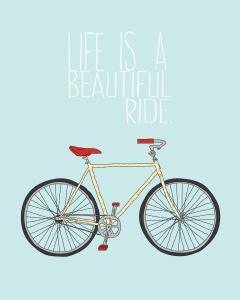 Last year I began a challenge to write down at least one positive thought every single day. This was partly inspired from Pinterest, partly inspired from my mom. The idea is to take a small piece of paper, write down a highlight from your day, something you learned, a fun trip, an accomplished goal, etc. and put it in a jar. At the end of the year, read through all of your “happy moments”. They serve as a reminder of how lucky we all are, the things we worked hard to achieve, and help us appreciate all that we have.

At the end of last year, my mom read through her happy moments with me, and although there weren’t nearly 365 of them, it made me happy to hear about the positive things in her life, and I was inspired to do the same.

So in 2013 I tried to write down my happy moments. There were months where I was writing several per day, and months where I wrote nothing at all. The important part is not to be disappointed in yourself if you aren’t writing often; that defeats the purpose of the exercise. Make it a goal to write often, but don’t beat yourself up about it if you don’t.

New Year’s Day came around in 2014, and I read through all of the notes I wrote. If you know me, you know I have a terrible memory. Reading through all of the great things from 2013 allowed me to re-remember them, and make less room in my brain space for any negative memories that may have been floating around.

END_OF_DOCUMENT_TOKEN_TO_BE_REPLACED

My brother was in town visiting a few friends this past week in Philadelphia. I decided to meet up with all of them for some drinks after work, since my brother and I rarely have the opportunity to hang out. He lives in Queens with his girlfriend, works crazy hours in a nursing home kitchen and does street art in his free time. That makes getting together for holidays, or even the occasional lunch somewhat difficult.

My brother and I have never been super close, but he has always been supportive of me, impressed with my accomplishments at such a young age, and takes every chance he can to brag about me to his friends, coworkers, acquaintances– you name it.

My brother never went to college. He got himself into some trouble in his teenage years, and at 27, is still working on bettering himself. He has a job that he enjoys, but maybe doesn’t earn as much money as he’d like, and has somewhat of a “starving artist” mentality. For this reason, I think that he admires how hard I work and the things I’m working to accomplish in my career. I wouldn’t ever call it jealousy; I genuinely believe he is proud of his little sister. END_OF_DOCUMENT_TOKEN_TO_BE_REPLACED

But, if I were at Mozcon…
END_OF_DOCUMENT_TOKEN_TO_BE_REPLACED

This is what Google tells me is happening on the Internet about me, “Emma Still”. You can decide for yourself what’s true and what’s not.

I love a short hemline.

But I value my education above all else.

END_OF_DOCUMENT_TOKEN_TO_BE_REPLACED

Luckily SEER was able to address our fans’ requests. If I was a search marketing company, and happened to catch this post, you bet your ass I’d be sending this out ASAP to my team. I’d see if we could drum up some kickass content, that addresses what our competitor’s audience was asking for, and publish it before our competitor could say boo. Then I’d send a respectful nudge to Sally so and so to let her know that we were listening to her needs, and had our team try to help her out. This is even easier if you already have the content your competition’s audience is requesting.
END_OF_DOCUMENT_TOKEN_TO_BE_REPLACED